Event was organised in U.K. by World Humanitarian Drive (WHD)


On “International Day of Conscience” HE Nelson Mandela, Honoured with a Title “Patron of Humanity” by the former President HE Anthony Carmona of Trinidad & Tobago, his eldest grandson Mandla Mandela MP received the award posthumously– event was organised in U.K. by –World Humanitarian Drive (WHD). Information support was provided by TV BRICS.

05th April 2021, London, Conscience is the mirror of our souls, which represents the nuances of our lives in its true distinction.

“Promoting a culture of Peace with Love and Conscience” is a holistically curated event organised by “World Humanitarian Drive (WHD)” a International NGO founded by Dr Abdul Basit Syed, a Global Peace Activist in Croydon, U.K. to celebrate and commend the efforts of the international community to promote peace, tolerance, inclusion understanding and solidarity. 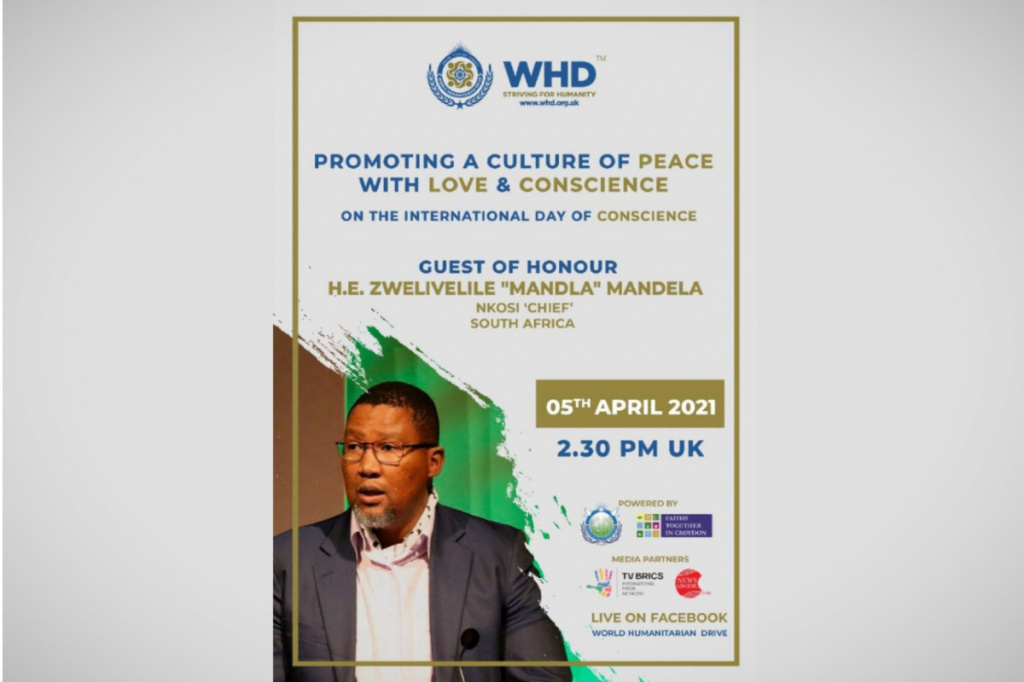 This special event took place on April 5th Monday at 2.30 PM UK as a celebration to mark the International Day of Conscience. The day aims to promote a culture of peace based on a set of values, attitudes and behaviours inspired by the principles of freedom, justice, democracy, human rights, tolerance and solidarity. WHD has been supporting humanitarian values with peace & love being its core ideology, aiming to build a just, peaceful and inclusive society to support the United Nations 2030 Agenda of Sustainable Development Goal.

This event was partnered with Oasis Academy Coulsdon and Princess Frederica School. Dr Abdul Basit Syed, founder of WHD, strongly believes children as the torchbearers for a harmonious society, right thoughts needs to be nurtured in the minds of the children to practice the culture with love and conscience. Hence he continuously initiates similar WHD events and programs to ensure that.

Children have played an active part in this program for them to feel the positive impact. Each of the children had a chance to interact with the event Chief Guests and they made the event more exceptional with their exclusive dedications through forms of interactions, arts and song.

Dr. Abdul Basit Syed, Founder Chairman of WHD initiated the days proceedings with his thought provoking speech about the cause of the event also welcoming the Special Guests. He ensured that every audience understood the levels of impact that would be created by the end of the program.

Croydon Mayor Cllr. Maddie Henson said, “The world Conscience day is celebrated for people to self reflect, follow their Conscience and do the right thing. To emphasize everyone has self respect and right to live with peace and security”

The Guest Address by Hon_Mandla Mandela MP, highlighted “Never in human history can the victim and villain be treated the same. Restitution, redress and restoration of a moral, just world order is a precondition for peace.

The Chief Guest Address by H.E.Anthony Carmona reminded, “The world is in need of Conscience driven leadership that encourages peace Harmony, compassion as a part of governance. We need leaders who do good to all. Let’s us all follow Philosophy over profits. Part of the role of International Day of Conscience is to awaken the advocacy that enlighten the ignorant.”


The President launched and presented “Grand Saviours Award” signed by him to Croydon NHS and Croydon Metropolitan Police for being compassionate in risking their own lives to save others. The award served as a mark of respect to the sedulous hard work of these noble institutions during this COVID crisis to maintain stability that was noble, inspiring and outstanding. This unique award was presented to honour and salute Institutions that serve to the purest of their conscience to save the world throughout the year to maintain social order and mitigate potential threats to individual or national safety to protect preserve the quality of life for others amidst risking their own as they form the tangible link between any nation and its people especially in fragile situations to ensure stability prevails.

HE Anthony Carmona presented the "Patron of Humanity" Title Award Posthumously to HE Nelson Mandela, a leader of divine inspiration for being the guiding light to millions of voiceless. His grandson Hon. Mandla Mandela received this award on his behalf. "Patron of Humanity" is a title awarded by WHD in recognition of outstanding services rendered to guide, support and inspires being a role model global leader.

The President also presented the “Regal British Award” as a tribute to honour the fallen Croydon Police officer Sgt Matt Ratana for his beloved services to humanity. The distinguished "Regal British Awards" was also presented to Dr Agnelo Fernandes MBE FRCGP, the Chair of NHS Croydon and NHS SW London and Hon. Mandla Mandela MP, for their exceptional leadership that inspired others from around the world. This great event set a standard to Honour the most beyond deserving.

The president congratulated and passed his best wishes to Dr Abdul Basit Syed, for organinsing this beautiful program, He congratulated all the awardees and encouraged and appreciated all the students for their involved participation in the event.

Finally, the event concluded with the vote of thanks delivered by Eugene Ankomah, Secretary-General of WHD, UK & world renowned visual artist.

This event called upon every human being to participate in individual capacity and through networks putting an emphasis on celebrating diversity and inclusiveness, reminding to all, that we’re part of a human family, connected and bound by something far more powerful and significant than what divides us.